It was a dominant defensive and offensive outing for the Typhoon Juniors as they took down the Orioles 19-2 on Sunday at Lions Rock 2. From the first at bat the Typhoons scorched the Orioles young pitchers and raced to a 13 run lead.  Shaye Schroth started on the mound in an impressive 11 pitch inning, with two strike outs and a run on an error.  At the plate Daniel Zhang continued his hitting bonanza going 4 for 5 with a triple and 5 RBIs. Shaye Schroth and Jett Peterson were also amazingly productive going 3 for 5 each , with a pair of RBIs each.  Jacob Lee had a pair of hits and two RBIs.  A deep bullpen came in to hold the lead, with Theo Simms, Aaron You and Daniel Zhang each climbing the mound in relief.  The Typhoons offense locked down the win with a pair of double plays and some great throw outs at home and first base. Pitcher Shaye Schroth took home the victory, up 13-0 in the first inning.  In the end, a comprehensive and complete team effort to blow past the Orioles and take a 3-2 record into next week’s game against the Martins.

It was all Jacob Lee on the mound as he hurled 4 flawless innings, nearly a no hitter, to derail the Polar Bear Express, rendering them defenseless at the plate.  Adin Friedlander hit a flawless 3 for 3 and Aaron You went 2 for 3 with 3 RBIs as the bats were cracking at the plate all day for the Typhoons.  Jacob Flach, batting cleanup, went 1 for 2 and had 3 RBIs on the day. Duncan Rach also went 2 for 2 and knocked in a run.  Sebby Schroth had two hits, including a double to score a run.  The victory was locked down though with an absolute “lights-out” pitching performance by Lee who racked up 9 strike outs against only 14 hapless Polar Bears hitters.  It was a spectacle to watch….!  The Typhoons are now 2 and 0 heading into the Thanksgiving bye-week.

The Eagles and Pirates played another close intrasquad game with the Eagles winning 5-4.  Pitching and defense were the highlights on both sides with a collective 14 strikeouts by both teams.

The 14U Eagles faced a well-coached Phoenix Black team. With Rento Ishikawa starting on the rubber, Phoenix Black started off well with a couple of well-placed singles that resulted in a three run top of the 1stinning. The Eagles came right back to tie the game with four straight hits by Kai Shohtoku, Ryan Wang, Kento Yan (2 RBI triple) and Daniel “Boomtown” Looram (RBI double). The game remained quite tight until the top of 4th with Kai Shohtoku on the mound trying to protect a 1 run lead. However, Phoenix Black picked up two runs as a result of  a couple of throwing errors in the field. With the Eagles down by 1-run, and time running out at the beautiful Sai Tso Wan baseball field, the Eagles did not allow their spirits to set despite the oncoming darkness. With one out, Kento battled out a walk after getting to a 2-2 count. He then stole second, and tied the game off a clutch double by Boomtown, his second of the day. After Phoenix Black struck out the next batter, it was up to Boomtown and Isabelle Smyth to try and manufacturer the winning run. With Boomtown sitting on third after stealing a bag, and Isabelle (and the Eagles) down to her last strike, the opposing pitcher threw a pitch inside that the catcher was not able to hold onto. Like a pouncing tiger, Daniel sprinted towards home and slid home for a memorable first win for the Eagles 14U team!

The Minors Typhoons (3-1) got back on track by throwing a combined no-hitter with three pitchers comfortably defeating Martins Blue by a score of 13-1.

The hitting for the Typhoons returned in a big way with Eugene Yan leading the way with two hits along with Quinn Lawler hitting an opposite field double and Yunhan Jiang with his first TTBC hit getting a big RBI triple to the left-center gap in the second inning.

Not only did he have a strong offensive game, but Eugene (2-1) also picked up the win by pitching two strong innings striking out four.  Simon Chen came into relief racking up five strikeouts in an inning and two-thirds and George Rao finishing out the game.

I think Duffy Daugherty said it best “A tie is like kissing your sister”.  Playing in the late game as darkness set, the Sharks and Lions played to a stalemate after 4-innings to an 8-8 tie.  It was an emotional and exciting game but ultimately the Sharks decided the fate of this game.

Offensively, the Sharks are balanced and continue to grow with good contact, plate discipline and speed on the basepaths.  The 8 runs came off 5-hits, 7-walks and 7-stolen bases.  Shout out to Alexandre with a two hit game and giving the Sharks a chance to “walk it off” by getting to 3rd with a 2-out triple!  Taku, Wicks and Conner continue to lead the team with hits, close behind is Kaya being one of the most feared hitters on the team, nailing a bullet down the third base line for a ground rule double.

Pitching is probably best summed up by the Charles Dickens quote “it was the best of times, it was the worst of times”.  The Sharks stuckout 11 of 12 outs, the Sharks walked 14 batters.

In the season’s first tightly contested game, CP Dragons walked away with a huge win over CP Thunder when Liam McDermond hammered a 2 run homer in the bottom of the 5th to end an exciting back-and-forth affair. Final score 11-9. Liam also made the defensive play of the game when he snared a two out bases loaded line drive by John Sweeney to keep the score tied in the 4th. Both teams hit well and racked up 41 hits combined. Liam, Nicky Artman, Franklin Karnitz, Emmett Wong, Calvin Larsen, and Violet Hosford all had multiple hits for the Dragons, while Gavin Fischer, Sawyer Gill, and Axl Gill had 3 hits each to lead the Thunder.

In the Main Field, CP Sharks took on the Typhoons in a rematch of the championship game from last season. As the youngest team in the division, some early struggles were expected for the Typhoons but they are already showing fight and playing hard until the last out. Brady Fallon and Jacob Tsai collected multiple hits with Brady hitting a sharp line drive double to the right-center gap in the 5th inning. The Sharks collected 24 hits with everyone pitching in. Cayden Christie made a sensational TTBC debut going 3 for 3 with a double and 2 RBIs. Emma Li collected her first hit on a single to drive in 2 runs. Defensive play of the game came from Jake Plotkin of the Typhoons when he drifted back to catch a fly ball with 2 runners on board, almost getting a double play in the process.

For this week’s TBall Future All Star, we are featuring Lincoln Francis.

Lincoln (League Age 6) is a long, athletic SS with outstanding range. He possesses a cannon arm and expects to stick at SS in the minors/majors. Though some scouts believe his future is on the mound. He is known as a great teammate and a clubhouse leader, but you don’t want to make him angry as he is a trained master of Thai boxing. 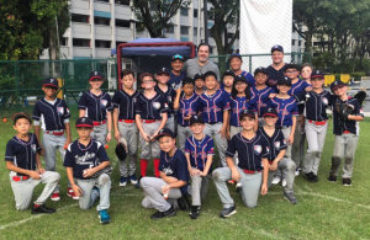 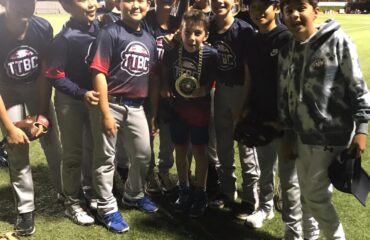 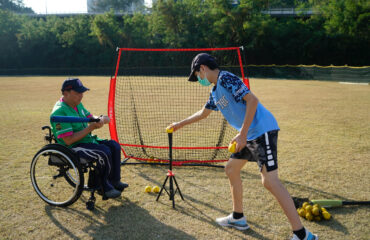