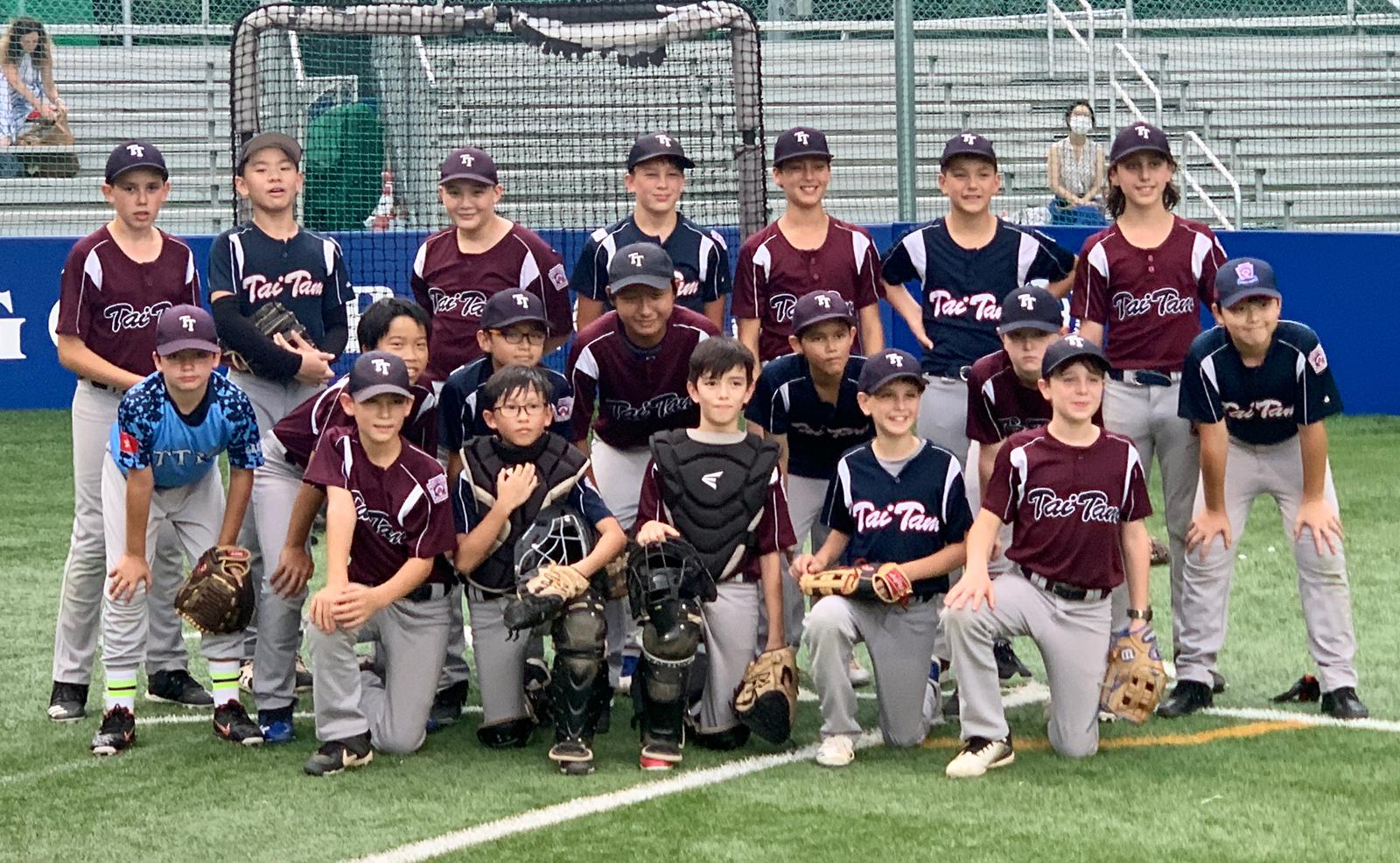 It was the last weekend in baseball last weekend we saw some great games.  While the “swashbucklers” would come close yet fail in their effort to win the Minors chip, there was some “cardiac kids” playing for the Majors this past weekend with five walk-off games including the championship and a rare trifecta where the TTBC teams beat the JBC teams in three walk-off games in a row.  Capping it all – the Pirates would play a team of all girls last weekend which would feature the talent pool that is really developing across HKLL and TTBC with our young women.  It was an impressive show.

As a commissioner – I was really proud of the types of kids we are developing at TTBC.  These players are gritty, unselfish and focused.  Many will not play college baseball yet these skills they are showing will take them a long way  in life. Our TTBC board was really proud of the Player group, and the coaches and parents that got them there.  Good year TTBC!

Typhoons finished the season with some strong individual performances & a lot of fun.  In-the-park home runs by Jacob Flach (2) & Miles Evans.  Clutch RBI’s by Isabelle Smythe, Adrian Unertl, Noah Lambert & Jake Thompson.  Gutsy pitching performances by Noah Lambert, Jake Thompson, Miles Evans, & Vance Davis.  In our lone win of the tournament, Derek Poon decided to take care of business on his own by leading off with a line-drive double in the bottom of the 6th Inning.  He stole 3rd on a passed ball then scored on an overthrow to win the game in exciting fashion.

Overall a successful season of development for these young athletes.  Special thanks to our coaches – Steve Flach, David Lambert & Sean Rach – for all your help throughout the season!

It was an amazing week of baseball this past week for the TTBC Thunder.  It started with a pool party last weekend at the Waag Casa and ended Sunday as the Spring Majors Year End Tournament Champions going 4-0-1 against the Eagles, Typhoons and Buffaloes.

So many exciting plays, games, and kids that did an amazing job this week and honestly would not be appropriate to single out any individuals as every one of them on the TEAM contributed to a great week of baseball and a great season.

Game 2-Beat the Buffaloes on a walk off 6-5 in the bottom of the 6th.  Whole team ran out onto the field and mobbed the Thunder hitter.

Game 3-Tied the Eagles 5-5 on a seesaw battle the whole game. Shoe string catch by our left fielder saved the game as they had runners on first and third

Game 4- Beat the Buffaloes- 11-3 after calling up a player from the “Alternate Site”. First play of the game the Alternate Site player caught one of 2 fly balls to right field.  The Thunder got 13 hits and we used 4 pitchers and 2 for the first time this season. We also caught every fly ball hit to the outfield.  Beginning of the season we missed every fly ball to the outfield……HUGE improvement by our team and shows we can learn and grow over the course of a year.

Game 5- Won Championship game against the mighty Eagles 3-2.  Some of the best pitching and defense to be played at the Majors level for TTBC. Pitchers dual and timely defense and a walk off hit in the bottom of the 6th……again by our Alternate Site guy….

Good luck to all rising Juniors players- Chapman, Boom Town, Macho Nam, All Day, Powerhouse, Sebster, Speedy, and The Hit King- the Thunder Coaches will miss each of you and will be rooting on Gamechanger!!

The Eagles had their wings clipped in the final game and put an end to a 30 game win streak which beat the previous record by 12 games.  In the tourney the Eagles would go 2 -1-1 yet featured some amazing hitting from Ryan Gardner who stole the batting title with his 8 hit in the final four games.  Ryan and Kai Shatoku continued their strong  finishes at the plate and Andes would carry the team with three fantastic starts during the tourney.

And we would also like to thank our title sponsor Shake Shack…..

The HKLL Minors season officially concluded on Sunday 23rd May with a series of final games that determined placing of the ten teams in division.  The TTBC Eagles looked to wrap-up the Lower Bracket against the Astros while the TTBC Sharks and Typhoons were also in action in Upper Bracket play.  All roads led to the afternoon finals as the Pirates were vying for Minors baseball supremacy versus the Korean Angels.

In a compact three inning affair, there was no shortage of drama as the high-flying Eagles managed to fend off the Astros in a game that saw the lead see-saw four times… in a three inning game!  The birds secured their victory via a walk-off walk in the bottom of the third as Keziah “eagle-eyes” Wall drew the BB (base on balls) scoring Eli Bartell.  Final score:  Astros 11 – 12 Eagles.

The win meant the Eagles were the premier team in the Lower Bracket, placing them in 7th out of the 10 ten team HKLL Minors Division.

In the game for 5th and 6th place, the Sharks of Tai Tam Bay hosted the Martins of Shatin.  The Martins came out flying, posting the maximum five runs in the first inning.  The Sharks would bite their way back into the game pulling within one run in the bottom of the fourth but the Martins put up another five in the top of the fifth to put the game out of reach:  Shatin Martins 11 – 5 Sharks.

The Sharks started Kingsley Wang on the bump but he would last one inning.  Luke Murphy, Briggs Freeman, Jackson Malanac and Ian Horng would come in from the bullpen and the quintet combined for ten strikeouts.

The hard-hitting Sharks were contained in this game with Freeman leading the way with two hits.  Wang, Jack Simmons and Sabastian Snape also chipped-in with hits.

The Typhoons were up against the Japanese Yakult Swallows in the 3rd place match-up.  However, only a category three typhoon made its way to Ho Man Tin West on this day as the Typhoons fell behind early making a series of infield errors which handed the Swallows the game:  Typhoons 1 – 12 Swallows.

Davids, Weiss and Wu were on the mound as the duo would strike out six batters.

Weiss and Wu also helped out at the plate with hits as did Jason Zhu and Hotin Woo who also contributed.

In the final game of the day, the TTBC Pirates were up against the Korean Angels in the Championship game.  In two previous encounters this season, the Angels emerged victorious on both occasions:  1 to 2 back in November and 7 to 1 more recently.  The Pirates, champions of the TTBC Spring Classic, were looking to clip the Angels’ wings and put an end to their undefeated season.

All the more remarkable and improbable when you consider this team’s journey dating back to last season:  marginalized outcast, labelled pariahs and considered unworthy of Minors baseball – a befitting team name:  the Pirates.  And now, attempting to bring Minors glory to the Club… glory not seen since Mefford’s Eagles a few years back.

The Pirates also gave new meaning to the old maxim: “win as a team, lose as a team”.  While the team undoubtedly came together as a tight bunch of seafaring buccaneers this season, they did so by fielding 12 or 13 players game in, and game out throughout the season… and winning!  The coaches resisted the temptation of reducing the roster for the finals and instead, elected to play all 13 Pirates against the Angels’ ten.

A factor in the outcome?  Arguably… but no more than the midday heat, the umpire (or base umpire), the banging of a trash can or any other variable(s) that impact a typical baseball game.  In the end, none of the above mattered.  Much more fundamental, and damaging for the Pirates were two defensive errors that gifted two unearned runs to the Angels.

Against a disciplined team that does not reciprocate with errors, that would prove the difference – such is baseball…  the final score:  Pirates 2 – 3 Angels.

Over the last two seasons, the team was led by three core players:  first basewoman, Anyssa Yang and the battery of Isshin Satake and Donovan Ma.

In the finals, Satake would pitch a gem in four innings of work in a pitcher’s duo.  Will Talsness came in as relief from the bullpen and together they would strike out seven and issue zero walks.

Hits leader, Blakely had two hits and drove in the first run for the Pirates with a hard-hit double scoring Tommy Carale.  This made the game 1 to 2 in the fourth inning, but the Angels would answer and add one more in the fifth.

With the score at 1 to 3 in the top of the sixth inning, Talsness led off with a solo rocket that reportedly ended up in Victoria Harbour, thus making it 2 to 3.  Moments later, Olivia Plotkin took a pitch for the team and Connor Wang walked, sparking hopes of a sixth inning rally.  However, that would not be as the impressive Angels closed out the game.

An error or two away from what may have been a true Cinderella story… but a wonderful season for the marauding Pirates nonetheless.

The Pirates would like to thank all their supporters:  parents, family and friends, including Coaches Unertl, Shohtoku and Weiss and other members of the TTBC community who braved the heat to support in-person and not to mention the legions following on GameChanger – we trust you were entertained by these swashbuckling kids!

You will get memos this week on the following topics so keep your eye on stuff coming from the TTBC banner: 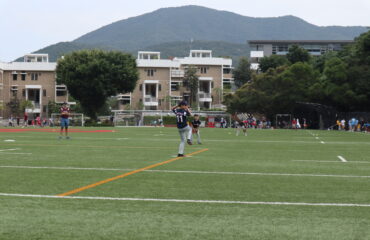 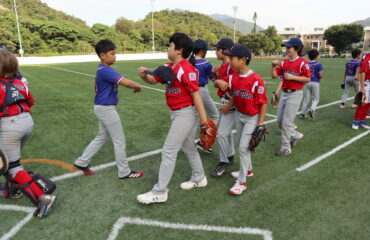 Week 12: Eagles and Typhoons Square Off In Juniors.