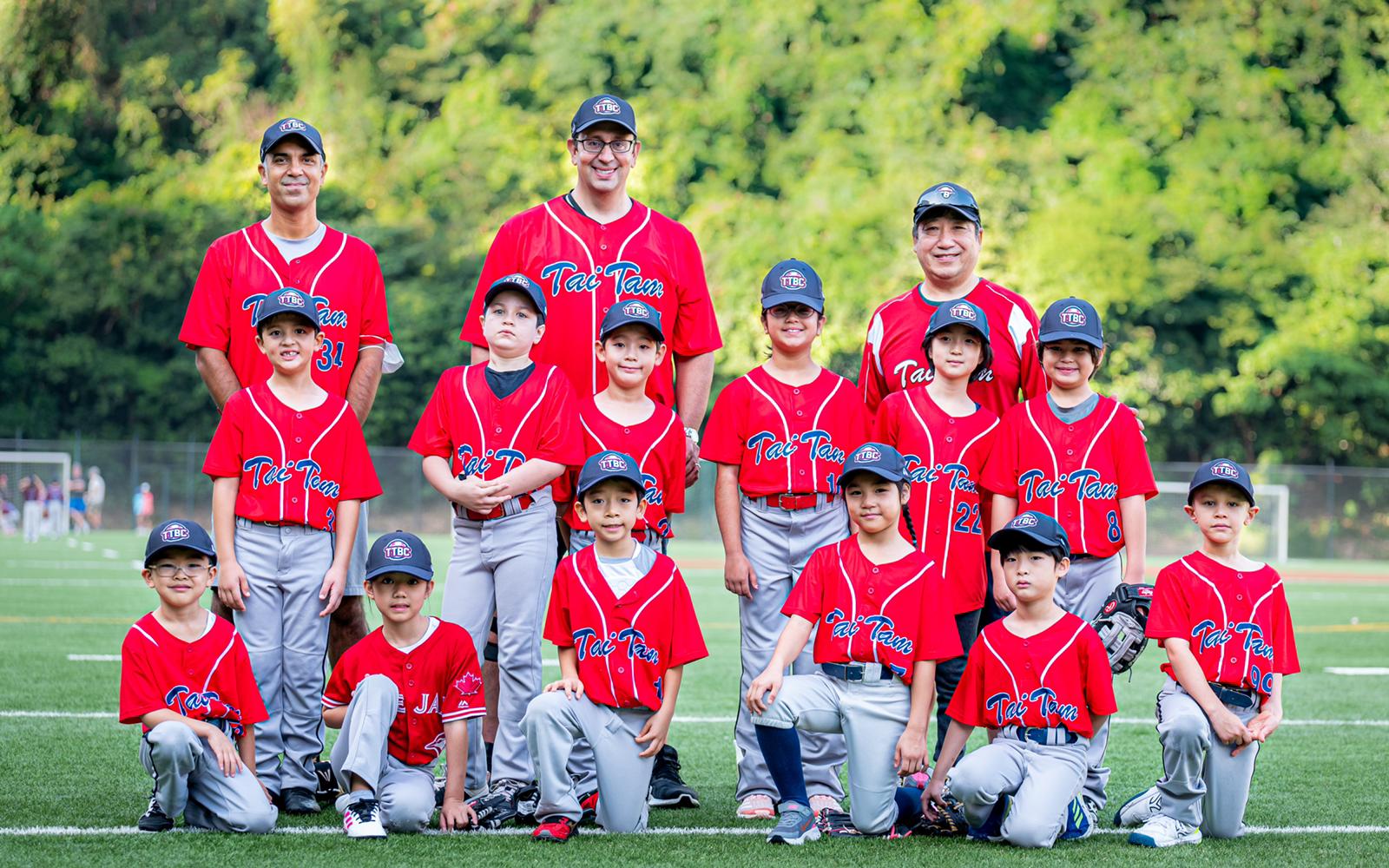 It was another epic showdown between TTBC’s two premier Juniors teams, the Typhoons and the Eagles, on Sunday morning.  A wild game of en fuego bats and tense pitching duels played out under the watchful gaze of mighty “Lion’s Rock”! The Eagles swooped down on the Typhoons in the first inning with a 4 run bonanza again starting Typhoon pitcher Ethan Holland as the Typhoons looked shaky at the plate and in the field in the first of 4 rounds.  But the Typhoons found their rhythm in the 2nd inning and began to click into the cadence and time the power pitches of Eagle’s starter, Woochan Nam, a talented young Korean fastballer.  The Typhoons pounded away with well placed singles and a few doubles to take a 6-4 lead.  In the second inning Ethan Holland found his rhythm and kept the Eagles to a single run – 6 to 5 into the third.  It was here that the Typhoons began a slow and steady assault on the Eagles bull-pen and defense, racking up another 6 runs for a 12-5 lead in the top of the 3rd.  The Eagles pitchers, Andes Chai and Max Barney, tried valiantly to stem the Typhoons offense from the mound, but well placed singles and aggressive base running by the Typhoons kept home plate busy.  Daniel Zhang entered in for relief in the third inning and let in one run in a 7 pitch inning.  It stood at 12-6 going into the fourth and final inning.  James Looram took the mound for the Eagles to lock down the blistering Typhoon offense, but the Typhoon bats were still plenty hot and a string of doubles by Daniel Zhang, Jacob Flach and Jett Pederson (who almost cleared the left field fence on two consecutive at bats) paved the way for an 8 run slugfest for the Typhoons.  However, even at 20-6, the game was far from over and the Eagles began a tenacious counter-offensive in the final inning, knocking Jett Pederson around for 3 more runs before he was replaced by Theo Simms.  The Eagles added 2 more runs in a courageous comeback effort before finally being vanquished, 20-11, by the Typhoons defensive line.  The box scores were impressive: 17 hits by the Typhoons and 14 hits by the Eagles; 15 RBIs by the Typhoons and 10 RBIs by the Eagles; 12 stolen bases by the Typhoons and 7 stolen bases by the Eagles. Both teams left 8 runners stranded.   It was an exciting day of baseball for the TTBC Juniors!

The Pirates Majors beat the Angles Majors 4-3 this past Sunday in a very intense game.

The Pirates were the home team and struck first, scoring three runs in the first inning. Ryan Kim and Briggs Freeman both drove in a run each, and to cap it off, Gabriel Gusak hits an RBI double to left field to drive in the inning’s third run.

However, the Angels clawed their way back. Ryan Kim started on the mound, while Khai Harris came in as relief. In addition to solid defensive play, the Pirates’ pitching held an outstanding hitting team to only one run in each subsequent inning.

Heading into the fifth inning the score was tied 3-3. Again, the Pirates defense stepped up to hold the Angels scoreless. Going into the bottom of the fifth, the Pirates led off with a walk, followed by a couple of hits. With the bases loaded and two outs, Isshin Satake busted out an RBI single out to the left-field to take the lead 4-3 going into the final inning.

At the top of the sixth, the Angels led off with three singles to load the bases. The following Angels batter hit an infield pop fly, which the umpire called out per the infield fly rule. With one out and the go-ahead runner in scoring position, the next Angels batter hit a shallow fly ball to right-center. As we all held our breath and watched the ball sail through the air, out of nowhere Takeo Blakely came sliding in for the ball. As the ball hit his glove, it popped out momentarily, but he then grabbed it with his other hand – giving everyone an ESPN highlight-worthy catch. The Angels’ runners, unaware of the caught fly ball, did not tag up and were jammed into a double play, ending the game in a walk-off for the Pirates. What a game, what an ending!

The TTBC Eagles Majors played Ninewest and won 16- 1 to go 3-0 on the season. Adrian Unertl had a great game pitching striking out 8 and walking 0 on 50 pitches over 4 innings….not easy to do!! Eagles hitters were lead by Adrian at the plate going 3 for 3 and Gus Ernst going 3 for 4.  Sierra “Lightening McQueen” Lee got her first hit of her majors career and it will be one of many.  Next week the Eagles play the always tough Japanese Buffaloes.

Another great day for baseball!   Playing on Halloween can be unpredictable (given the sugar rush), but after a spooky start, the Sharks settled down to give a great team offensive performance.   The Sharks handily beat a developing YMCA team 15-5 with great pitching and hits, hits, hits, 10 in total!

After a shaky start with three walks and a hit batsman, the Sharks could have been in for a long and scary afternoon.  But not to fear, Taku Cheng regained his composure and struck out the next three batters.  So with the bases loaded and no outs, the Sharks managed to get out of the inning only giving up two runs.

That was YMCA’s best chance because the hit squad came up with five hits and posted five runs and Sharks were rolling from there.  It really was a collective team effort at the plate with the first seven in the line up all scoring 2-runs each.  On top of the 10 hits, the team walked 3 times and only stuck out 3 times.  Wicks and Connor both had two hits and a double, while Kaya got a double at her only at bat.

On the mound the Sharks sent up four pitchers that combined 11 strikeout no-hitter!   Though this week’s game had a different tone than last week’s with the Angels, the Sharks showed mental toughness both weeks with bases loaded situations and only giving up a run or two.  Way to go Sharks!

The TTBC Dragons broke into the win column this week facing a very young Lions Blue team.  The Dragons found some early difficulty locating the smaller strike zones of the Lions and walked in a two runs in the first two innings (giving up an additional run on an error), but then settled down and closed out the last two innings by striking out the side.  The young Lions pitchers were also having difficulty with the strike zone, and gave up 15 runs on 2 hits.  However, they held their heads high and showed good hustle and great attitudes.

The kids were excited to be back on the field after a rainout the previous week, and especially in their brand new jerseys!  T-Ball players continued to work on hitting, throwing, and catching with a little help from three HKIS Varsity players assisting our coaches as special instructors. CP players took part in a simulated game to experience the flow of the game and learn about different situations. Many of our kids are completely new to baseball so this was a great way to get introduced to the game through situational work. We will continue with this for another week or two before starting our season with official games.

In the final countdown to the regular season start, our CP teams played their final pre-season games. The Sharks facing the Thunder in the near field and the Dragons squaring off against the Typhoons in the main field. Even though they are just practice games, you can tell the kids already have their competitive juices flowing, showing emotions after a strikeout or hustling down the line for an extra base. All four teams could use more preparation time, but it’s no longer possible to hold these kids back. We are ready to play ball! Come November 6th, the Dragons will visit the Sharks, while the Typhoons will play host to the Thunder in the main field.

Our TBall team keeps growing and we are up to 16 now! Going forward, we will feature a TBall Future Allstar each week to give you a glimpse of our bright future. Stay tuned. 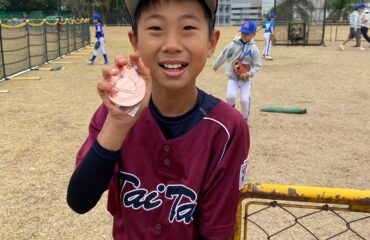 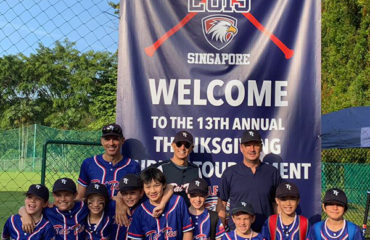