The Typhoon Nation rolled to a close but impressive victory over the Kaakiro Lions on Sunday morning at Lions Rock 2, eking out a 7-6 win in the final inning.  The Typhoons racked up 9 hits, 9 walks and a slew of RBIs and only one strikeout in solid performance against the tenacious Lions.  Gutsy pitching by Ethan Holland, Daniel Zhang and a great closing performance by Theo Simms.

Another great showdown at HKIS between our two 14U HKBA teams on Sunday night under the lights! Typhoons got 2 solid innings each on the mound from Jacob Flach and Aaron You and a great inning out of Adin Friedlander in one of his first pitching outings of the season.  Hits by Friedlander, Aaron You (2) and Damian Lee (2) and a 24 stolen bases over the course of 5 innings helped seal a close 11-8 victory for the Typhoons over the Eagles.  Notable performances:

In an intense back and forth TTBC battle between the Eagles and Pirates, it came down to the last play of the game as the Eagles triumphed….this time…6-5.  Play of the game was made in the top of the sixth inning winning by a run, the Eagles pulled off a walk off double play tagging a runner at home and then executing a perfect pickle play with the runner at  second base.  Great pitching performances by both teams(Harris, Kim, Unertl, and Waag) produced 19 strikeouts combined- impressive. Takeo Blakely lead the hitting attach on both sides going 4 for 4 and at this point of the year is 9 for 9!!  Tremendous game and sportsmanship and it was unfortunate one team had to be on the losing end.  We are vying for the top 2 spots in the division the this year and we are on the right track.

With the beautiful fall weather finally settling in, this past Sunday was a “great day for baseball!”  And for the TTBC Sharks it was a big early season test facing the 2020-21 defending champion Angels. The Sharks were more than up for the challenge and came through with an exciting 8-6 come-from-behind victory that was back and forth the whole way.

The game was characterized by aggressive running on the basepaths from both teams. In total, the Sharks had 11 stolen bases and generated 6 runs by pressuring the Angels into fielding errors. Down 4-6 going into the bottom of the last inning, Conner Wang singled and then managed to get home on a passed ball. Ethan Man drew a walk, got to 3rd on good contact by Yamato Hamashima, and then scored the game tying run sliding into home. Kaya Racine walked and stole a base, then setting up Taku Cheng for the game winning double to bring her home, sacrificing her knee with a great slide at the plate.

Wickes Freeman also contributed 2 timely hits, one for an RBI, and Evan Racine had his first RBI double of the season.

On the mound, Taku picked up where he left off with 7 more Ks and only giving up 1 hit and 1 walk as the starting pitcher. Jason “J-Rock” Zhu and Conner Wang were solid in relief with a combined 5Ks.

Kudos to the Sharks players for stepping up with confidence and calm, and maintaining their resolve even after falling behind twice in the game. Way to go Sharks!

On a beautiful October day, the Dragons fell to the Lions Black team.  Dragons pitching had trouble finding the zone in the top of the first, giving up 5 runs on no hits.  Troy Cheng and Anthony Bacchas came on in relief and combined to throw 3 innings of 1 hit baseball, giving up only 2 runs.  In the end, Dragons were  unable to overcome the deficit, losing to the Lions 7-2 in 4 innings.

Audrey Ng, new to baseball, recorded the first hit of her baseball career on a swinging bunt that she was able to leg out.

The Minors Typhoons roll into their bye week with an impressive 10-5 win over the Ho Man Tin Blue Jays on a beautiful crisp Sunday morning.

In what was an early back and forth battle, the Typhoons took the lead for good in the fourth inning when the team started the hit parade led by George Rao and Eugene Yan.  Both players contributed to the scoring which gave the Typhoons a 5-3 lead.

After Simon Chen (1-0) shut the Blue Jays down in the bottom half of the fourth, the hits just kept on coming for the Typhoons in the top half of the fifth as they put up a five-spot to jump ahead by the score of 10-3.  Elijah Park’s two-run triple and a few wild throws by the Blue Jays sealed the deal as it contributed to the other three runs scored. 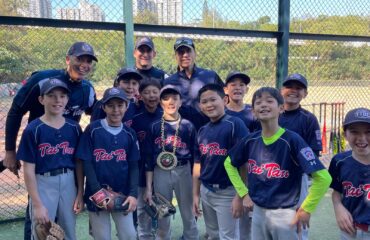