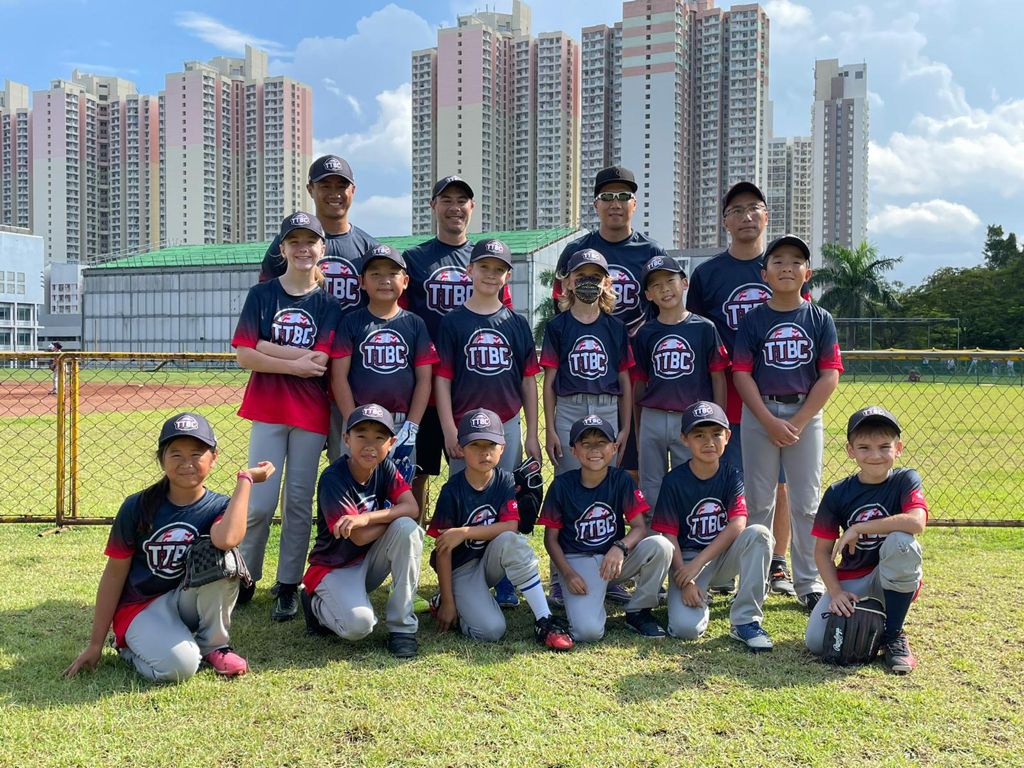 A TRIPLE PLAY!! The 14U Typhoons eeked out a narrow 10-9 victory over a talented opposition, ABC Dragons, in the first HKBA game of the season out on Lion’s Rock 1 field.  Fantastic pitching over 4 innings by Ethan Holland and Jacob Flach, punctuated by consistent hitting up and down the line up and solid base running with a ton of steals, pulled a near loss into the victory column.  And the boys made the very first Triple Play I’ve seen in 8 years of HKLL – Flach (P) to Foley (3B) to Holland (1B) on a flyout and pick off of runners on 1st and 3rd. It was a euphoric moment. Holland and Flach delivered 7 strikeouts and Flach let in only two earned runs, coming in to relieve and grabbing the win. Holland hit 3 for 3 (.1000) with 2 RBIs and Jonathan Foley went 2 for 2 (.1000) scoring 2 runs and mastering 3rd base over 4 innings.  Duncan Rach and Luke Lawler each hit .500 and scored crucial runs.  A great start for a young and exciting team and our first ever HKBA game. Let’s go Typhoon Nation!

The TTBC Juniors Typhoons started on fire against the always talented and tenacious Japanese Baseball Club (JBC) with a seven run first inning.  Hits by nearly everyone in the lineup as the Typhoons batted around the order and then some. Jacob Lee hit a 2RBI double and Jacob Flach hit a 1RBI double in the first inning hit-bonanza.  Power shots into the outfield by Shaye Schroth, Aaron You, Daniel and Julian Zhang and Ethan Holland fueled the early rally.  Collectively the Typhoons went 7 for 17 (.412 avg.).

However,  JBC was not sweating the deficit and came back strong chipping away against the Typhoon’s bullpen for 11 runs over three innings.  The Typhoon pitchers struggled with 9 walks and only 2 strikeouts (Daniel Zhang and Jett Pederson each with a strikeout).  The Typhoon fielding was also beset by a handful of errors, playing for the first time since the summer on the bumpy, lumpy, overgrown LR 2 field which, honestly, we were just not used to after playing on the pristine, groomed grass of Tai Tam. As the Typhoons launched a late rally, darkness fell quickly on Lion’s Rock field and we only managed to complete 3 innings (also due to a very late start).  It was nonetheless a pretty solid start with a lot of positives to build off of.  We will be back “Typhoon strong” for the Lions this Sunday !

Eagles Majors kicked off the year with a 27-3 win over the Lions scoring 19 runs in the first inning!  Eagles pitchers allowed 1 hit and two batted balls in play over 3 innings of work and the highlight was a catch by Oliver Barnes playing his first Majors game snagging a fly ball in left field.  Eagles hitters had 19 hits in 3 innings and had a collective .665 batting average.  10 out of 12 hitters tallied at least one hit in the game and the bases were filled with Eagles all day.

Pirates Majors hosted the Ninewest Majors on opening day and walked away with a 23-2 victory.

The game started with a bang, with the Pirates scoring seven runs in the first inning alone – and they never looked back. Everyone on the Pirates got in on the action as the team recorded 21 hits, with Takeo Blakely leading the team going five for five with four RBIs.

The Pirate’s pitching was stellar as they held the Ninewest Majors to three hits and two runs. Khai Harris led things off on the mound, lasting three innings striking out nine and walking one. Ryan Lem came in as relief in the fourth inning to finish off the game.

The Pirates took it home in the bottom of the fourth, scoring 16 runs ending the game by triggering the 10-run rule.

The Minors Dragons opened the season with a tough loss to the Martins Red.  The Dragons found difficulty connecting against the Martins ace, Evan Chan, who threw a 1 hitter through 40 pitches.  The Dragons rallied back against the Martin’s relief corps, but ultimately came up short.  John Zhu delivered the Dragon’s first RBI of the season on a ground out.  This was followed by a walk and three successive hits by the top of the order to finish out the last half inning with a 5 run cap.

With the game winding down due to time, the top of the fourth saw another offensive barrage by the Typhoons lineup led by Simon Chen’s grand slam to right-center field.  Those four runs scored helped close out another five-run capped inning increasing the score to 15-2.  Astros Storm did not give up despite the large deficit by putting up their own five-run inning in the bottom of the fourth to close out the game 15-7.

TTBC Sharks Minors started the 2021/22 campaign with a solid 7-4 victory over a persistent Astros A team.  On the hump was Taku Cheng who pitched a gem with zero earned, 6 K’s, one walk and a bang-bang play away from a no-hitter!  But it was an overall team effort on the field with some great defensive plays like Jason Zhu stopping a bullet down the first base line and Evan Racine was solid behind the plate saving a run on an attempted steal in the 4th.

On the offensive end, the Sharks were making good contact and were aggressive on the base paths!  All the runs were scored in the 1st (two) and 3rd (five) innings. Starting us off were Taku and Jason Zhu hit for a single and double, respectively, and scored on errors from aggressive base running.  In the third, Yamato started us with a walk and Kaya crushed a double in the gap to left centre.  This set up Taku for another single, scoring two and eventually himself.  Jason and Aaron Lee score on stolen bases off walks.

In the top of the fifth, the Astros rallied with three singles and four walks, scoring four in the inning but Jason and Wickes Freeman were composed on the mound and the defense held up to close out the game! 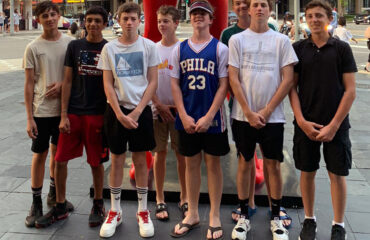 12U Typhoons Have Fine Showing at 2019 Singapore Turkey Tournament